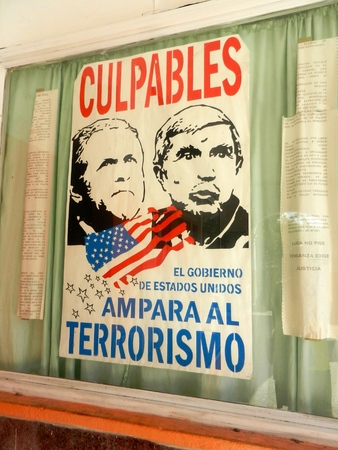 The modern-day Republic of Cuba was founded in 1959 when revolutionary forces led by Fidel Castro entered the capital and replaced the controversial government of dictator Fulgencio Batista.  Since 1965 the nation has been governed by the Communist Party of Cuba, first under Fidel Castro and, since February 2008, under his brother Raúl Castro. Cuba is one of the few remaining countries in the world whose government is structured according to Marxist-Leninist ideology.

Breaking decades of icy relations between Cuba and the U.S. (evidenced in the Bush-era billboard to the left), in December 2014, Presidents Raúl Castro and Barack Obama jointly stated their commitment to restoring normalized relations between the two countries. 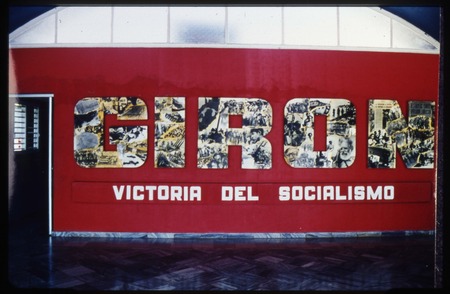 The Invasión de Playa Girón (known in English as the Bay of Pigs Invasion) took place on April 14, 1961. Trained and financed by the CIA, approximately 1,400 Cuban exiles landed at Playa Girón (Bay of Pigs) in an attempt to overthrow Fidel Castro.  Their efforts failed resoundingly, and the triumph of the young Cuban state against U.S. schemes bolstered its international prestige and credibility and inspired analogies that it was the Western Hemisphere's "David" to the U.S.'s "Goliath." 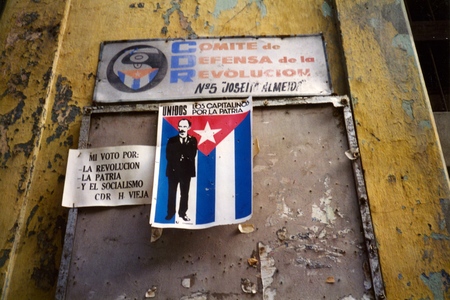 A door leading to the headquarters of the "Committee for the Defense of the Revolution No. 5" is decorated with a Cuban flag ("United: The capital [is] for the homeland") and a sign that says "My vote is for the revolution, the homeland, and socialism."

Fidel Castro established the Committees for the Defense of the Revolution, or CDRs, in 1960 to promote social welfare at the neighborhood level and, more notoriously, to report on suspected "counter-revolutionary" activities of local residents. 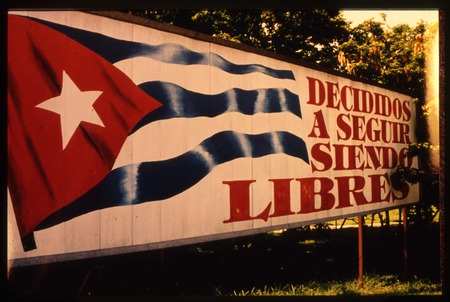 A billboard displays a proudly flying Cuban flag accompanied by the slogan "Determined to continue being free."

As explained in A Contemporary Cuba Reader: The Revolution under Raúl Castro (Rowman and Littlefield, 2015, 2nd edition), "A central dynamic during Cuba's last five centuries has been the Cubans' struggle against the domination by an external power (Spain, the United States, or the Soviet Union) that prevented the island from developing full political and economic independence" (p. 2). 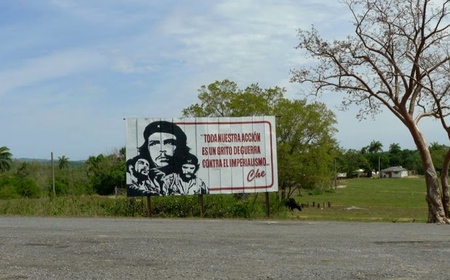 Ernesto "Che" Guevara (born in Argentina in 1928) was a Marxist revolutionary who emerged as one of the chief leaders (both political and ideological) of the Cuban Revolution.  Che's commitment to fighting the U.S.-backed exploitation of Latin America led him to support anti-capitalist movements in Guatemala, Cuba, and eventually Bolivia, where he was captured and executed.

This billboard features a quote by Che declaring, "Our every action is a battle cry against imperialism." 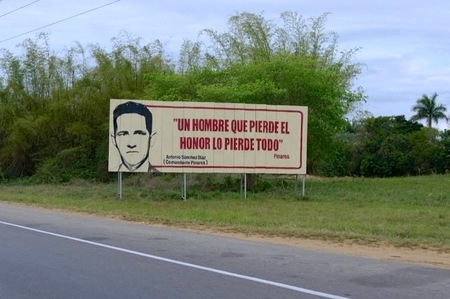 A billboard featuring a quote by Antonio Sánchez Díaz (a.k.a. Major Pinares): "A man that loses honor loses everything."

Sánchez Díaz fought in the Cuban Revolution from 1957-1959 and later joined Ernesto Che Guevara in Bolivia, where he died in combat. 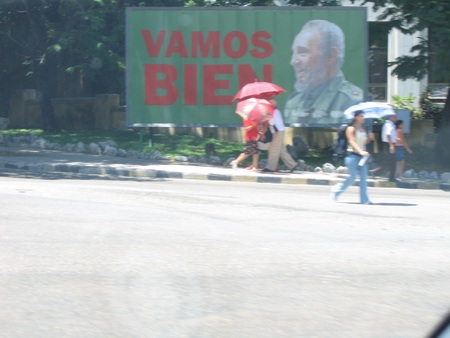 This image shows a rare appearance by Fidel Castro on a promotional billboard that was displayed during the Special Period of the 1990s and early 2000s, one of Cuba's bleakest times. The caption "Vamos bien," or "We're on the right track," is an obscure reference to what fellow revolutionary Camilo Cienfuego supposedly said to Fidel upon taking over Havana in 1959. 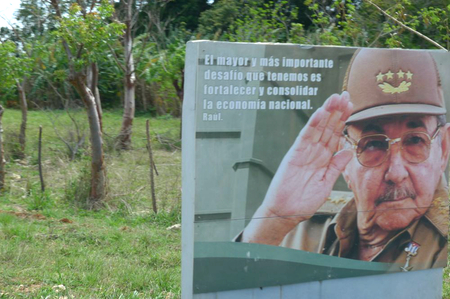 Billboard "Our biggest and most important challenge is strengthening and consolidating the national economy. Raúl."

Since officially starting his presidency in 2008, Raúl Castro has enacted rigorous economic reforms to "update" the socialist model and increase the island's productivity.  He is known for having a more pragmatic style of governance than his older brother, Fidel, while still seeking to maintain Cuba's one-party political system and comprehensive social programs. 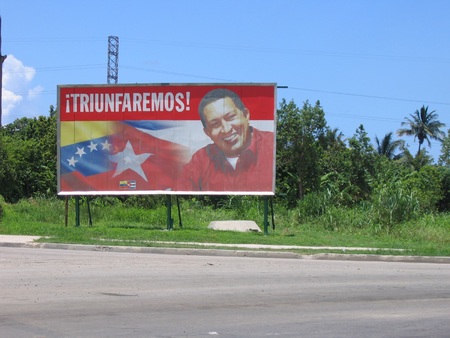 Billboard "We will triumph!", featuring a composite image of the Venezuelan flag, the Cuban flag, and Hugo Chávez.

After the collapse of the Soviet Union, Cuba entered its most important international alliance in 1998, when Hugo Chávez was elected president of Venezuela. Chávez and Fidel Castro began to work together on a self-proclaimed mission to unite Latin American and Caribbean nations and to bring about a more equitable world economic order.

Cuba has also found post-Cold War allies in countries such as China, Brazil, and Bolivia.